Mark Cavendish moved to within one win of Eddy Merckx’s all-time record as he collected his 33rd career Tour de France victory on stage 10 into Valence.

The Manxman held off the charge of Wout Van Aert and Jasper Philipsen to take his third win of this year’s race and move to the brink of the record.

Cavendish was guided to the line by his Deceuninck-QuickStep team-mates as they bossed the crosswinds that led to a hugely stressful finish to the 191km stage from Albertville. 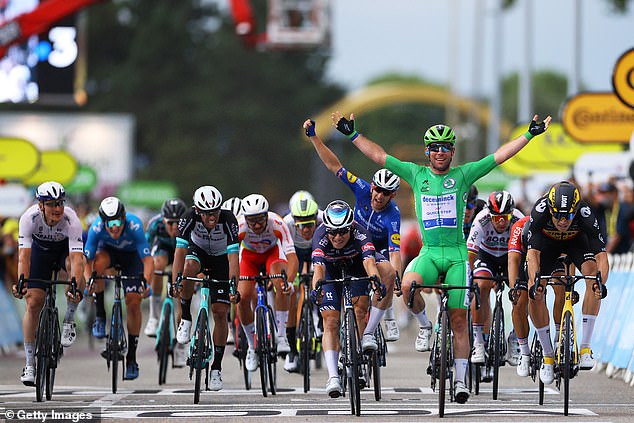 World champion Julian Alaphilippe was at the front of the charge as Deceuninck-QuickStep worked to split the peloton, piling pressure on Sonny Colbrelli, Cees Bol and Andre Greipel who all found themselves distanced at different times.

Though it would come together again close to the finish, it was Cavendish’s team who had the position on the road on the final bend, and neither Van Aert not Philipsen had the power to come around him at the last.

Cavendish took his first Tour stage win in five years last Tuesday, having feared he would never return to this race, but now has the opportunity to rewrite its record book before Paris.

‘It was an old-school, run-of-the-mill, like you read in the cycling magazines, textbook lead-out,’ Cavendish said. ‘Just getting the lads on the front, pull as fast as they can so no one can come past you.

‘We knew this finish, I didn’t make it the last time we came here in 2015, I got dropped, but we studied it and we knew if we took that last corner wide, we could keep the speed up. 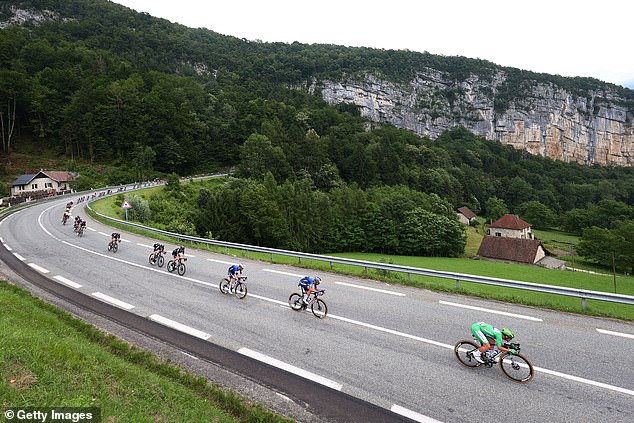 ‘It actually split in the wind. We didn’t try to split it, we were confident we had the team for the sprint, but again I’m just humbled.

‘I’ve got the winner of the Tour of Flanders (Kasper Asgreen), the world champion who’s been in the yellow jersey here (Alaphilippe), Michael Morkov who’s going to the Olympics to try to win the Madison, the Omloop Het Nieuwsblad winner (Davide Ballerini) leaving everything on the road for me.

‘I just had to finish it off. I’m grateful to all of them. I didn’t have to do anything – just the last 150 metres. I’m thankful to everyone.’